I recently gave a lecture to a class of safety professionals. I started with the following question: “True or false, stretching prevents injuries?” About one-third of the class said true, one third said false, and the remainder didn’t give an answer. Over the past 20 years, I have read various articles in the safety professional literature that are both conflicting and confusing. 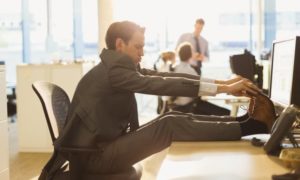 We need to further define our terms and consider all the variables before making this binary decision. What do we mean when we say stretching? What type of injuries are we trying to prevent? According to the bulk of the medical literature, injury prevention is being considered in the context of sports-related injuries, and the type of stretching that is mainly discussed is passive static stretching. The literature generally says that balance and agility exercises have the greatest benefit for preventing athletic injuries. Next, down the hierarchy are strengthening exercises that show some benefit of preventing sports injuries. Overwhelmingly, the literature says that there is little to no evidence to support the idea that passive static stretching will prevent a sports-related injury. Furthermore, the literature suggests that performing passive static stretching before an athletic event could be counterproductive.

Passive static stretching is when a muscle is fully lengthened by placing one or more joints into an end range position using an external force, such as another body part or an object. The goal is to achieve greater flexibility. Martial arts, gymnastics, and dancing are common sports that require a tremendous amount of flexibility and involve passive static stretching in their training program.

One of the most common sports injuries is a torn ligament in the knee such as the ACL. I suffered this injury when a judo player performed an illegal throw on me. I trained for 2 hours every day, 6 days a week. I did every type of exercise possible and I can say conclusively that there was no exercise I could have done to prevent this injury. My knee was traumatically hyperextended and twisted which tore my ACL, LCL, and lateral meniscus. It is fairly common for an athlete to be placed into a traumatic situation outside their control, in which injury will occur. The fact remains that there is no exercise that can completely protect an athlete from injury. It is the goal of athletic trainers to figure out which exercises provide the greatest benefit in forming some level of protection against injuries. Currently, the literature clearly states a hierarchy of exercises to prevent athletic injury, with passive stretching at the bottom.

The literature that explores stretching dissects it further, with a clear delineation between passive static and dynamic active. Dynamic means that the stretch is moving or held for a short time of 3-5 seconds, as opposed to static, in which there is no movement and the stretch is held for 15-30 seconds. Active means that the stretch is performed under the exertion of the opposite muscle group. For example, to actively stretch the hamstrings, you will activate and contract your quads. It is currently agreed upon that dynamic active should precede the sporting event for warm up and preparation of exertions. Passive static stretching is generally reserved for other training periods when the action is being devoted to improving flexibility; many athletes perform passive stretching at the end of training or competition.

Over the past few decades, an analogy has been made between a sports athlete and a factory worker. This seems to have been done to help persuade factory workers to take an active interest in self-care and performing preventative measures. Since athletes used to start their pregame activity with passive static stretching, this was passed on as an activity for the “Industrial Athlete” to perform as well. The sporting world has since evolved towards dynamic active pregame stretching, while many of the factory workers are still stuck in the old passive static stretching routine.

We prefer to use the terminology of “Ergo break” vs stretching program. We like this nuance because it focuses on improving circulation, removal of waste products, and increased oxygenation of musculature that is working, rather than simply improving flexibility. We aren’t creating gymnasts in the workforce, but re-oxygenating muscles will reduce fatigue, improve performance, and reduce injury risk. Active dynamic vs passive static is one of the key differentiating points. We also incorporate posture correction, tendon glides, and nerve glides into our active dynamic program.

It is important that the worker stay tuned into their body and perform the appropriate routine as needed. For example, if a worker is doing prolonged forceful pinching and starts to notice hand fatigue, then they should take a micro-break and perform the appropriate active dynamic stretches and glides. This will replenish the involved tissues with freshly oxygenated, nutrient-rich blood supply while removing waste deposits. We believe this start of shift routine is good for workers to practice in order to make sure proper technique is being performed. The greater benefit comes when fatigue begins to set into the tissues and the worker addresses this with an Ergo break. These activities also provide a rest pause, which is when workers intentionally pause their work to rest and recover from repetition.

We design Ergo breaks that are most suitable for the work being performed. If a department performs precise assembly work, then the activities will mainly be devoted to the distal upper extremity, neck, eyes and posture correction. We also consider if a job is employee-paced or machine-paced. Employee-paced jobs are ideal for Ergo breaks, while machine-paced jobs will require a relief person. Furthermore, it is good to have a protocol in which an Ergo break commences anytime the line quits moving; employees can chat with their colleagues while performing the Ergo break. It’s important to point out that this Ergo break program is designed to be in conjunction with an early intervention program. If an employee is having difficulty performing a dynamic active exercise, or the ergo break is not relieving the fatigue, then that person is referred into our early intervention program and we work with them individually, utilizing ergonomics, education, preventative exercise, and perform OSHA basic first aid as needed.

I hope this article brings more clarity to the question asked, as I prefer to ask a different set of questions. Does dynamic active stretching, posture correction, tendon glides, nerve glides and rest pause reduce fatigue in the worker? Unequivocally yes! Can the build-up of fatigue lead to the development of a musculoskeletal disorder? Indubitably yes! We are the largest ergonomics consulting business in the state of Missouri, serving over 50 communities in the Show Me State. We have seen first hand the benefit of Ergo breaks in conjunction with an ergonomics and early intervention program.